Jaye L. Knight’s newest novel, Exiles, has been released! How exciting, yes?! Exiles is the fourth book in the Christian fantasy series, Ilyon Chronicles. Read about it below, along with a special Character Spotlight,  and be sure to check out the other blog stops on the tour by visiting the official tour page. Don’t forget to enter the giveaway!

Exiled after their defeat in Samara, the Resistance struggles to find allies in their quest to restore King Balen to his throne and put an end to the emperor’s tyranny. When the crete people refuse to lend their aid, Balen leads a group to Dorland to reason with them and win their support. However, enemies prove to be everywhere, and they find themselves in a fight to keep Dorland from becoming Daican’s latest conquest.

Back in Landale, the arrival of a new enemy forces Trask and Anne to tread more carefully than ever. Tensions are rising, and the enemy is determined to test Anne’s loyalty and root out the location of Trask and the Resistance once and for all.

Feeling trapped within the walls of Valcré, Prince Daniel must contend with an ever-eroding relationship with his father. As their clashes escalate, the situation becomes potentially life threatening when his loyalty is called into question. His sister seems bent on branding him a traitor and actively seeking to condemn him to the fate of those put to death in their father’s new arena. Daniel is certain his father would never execute his only son and heir, but with other forces at work, it might not be that simple.

One small misstep could prove fatal for all.

Appearance: Shoulder length dark hair, amber eyes, fit build, 5’10” tall.
Age: 47
Race: Human
History: Daican is the emperor of Arcacia. His father died unexpectedly, leaving him the throne when he was only seventeen years old. It is his goal in life to honor his father’s legacy and create the Arcacian empire his father was working towards.

Author’s Notes: For me personally, Daican is one of the most interesting antagonists I’ve written about so far. I knew from the beginning, I wanted him to be both likeable and relatable. When Kaden tells Kyrin that Daican is manipulating her in the first book of the series, while that’s naturally what he would think in their position, it’s actually not true. Daican’s charm and kindness toward Kyrin in the beginning were genuine. He genuinely liked her and wanted her to be comfortable and content in Auréa Palace. He had no reason to feel otherwise. It wasn’t until Davira started bringing him condemning information on Kyrin that things change. Then his kindness became a mask to cover his suspicion.

Daican is cunning and calculating, but he is also equally charming and genuine until you cross him. Then heaven help you. He’s very driven, so any threat to his goals is dealt with swiftly and without mercy. What I find most interesting about his character is how he very much mirrors my heroes. He’s very dedicated to his faith in his false gods. He’s not just some power-hungry emperor. He truly believes he’s serving his gods by trying to root out and destroy believers in Elôm. His love for his father and for Davira are very real and deep. In fact, his close relationship with Davira very closely mirrors the close relationship Kyrin had with her father.

With just a few changes to his thinking, Daican could have actually been a strong ally to my heroes. Unfortunately, they have opposite beliefs.

Haven’t discovered the world of Ilyon yet? The first three Kindle books are on sale August 11th – 14th!
You can find them on Amazon. 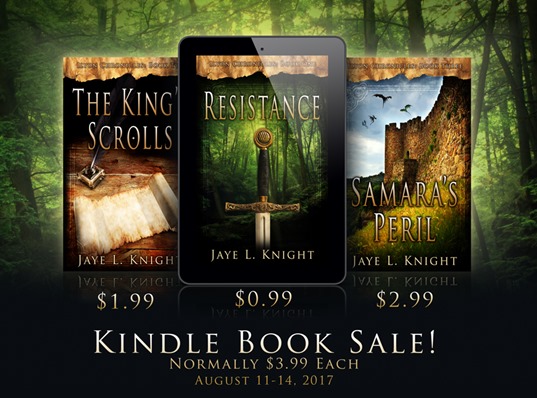 Jaye L. Knight is an award-winning author, homeschool graduate, and shameless tea addict with a passion for Christian fantasy. Armed with an active imagination and love for adventure, Jaye weaves stories of truth, faith, and courage with the message that even in the deepest darkness, God’s love shines as a light to offer hope. She has been penning stories since the age of eight and resides in the Northwoods of Wisconsin.

Share in the excitement of the release and enter to win a themed giveaway pack! Prizes include an autographed copy of Exiles, a pewter dragon necklace by treasurecast, and a sword letter opener! (Giveaway is open to US residents only. Cannot be shipped internationally.)