Looking for a clean romantic read? Check Jaye Elliot’s newly released book, No Chance Meeting. You can read all about it below, and don’t forget to enter the giveaways!

About the Book
Alex Jennings is done with life. After losing her brother in Afghanistan, everything has collapsed around her. Getting laid off from her day job and failing in her art career, she has nowhere left to turn. She once had faith to believe that all things would work together for good, but that faith died with her brother. Now she just wants the pain to end.
Riley Conrad served thirteen years in the military until three bullets sent him home. After a year and a half of physical therapy and scraping together a living, all he wants is to live a simple life and perhaps even open the coffee shop he dreams about. However, the weight of failing his parents’ expectations doesn’t make it easy, and working as a bartender isn’t getting him anywhere fast.
Could a “chance” meeting between Alex and Riley set them both on the path God always intended?
Available now from Amazon, Barnes & Noble, iTunes, and more!
20% of all February sales will go to the Mighty Oaks Warrior Programs.
My Review:
I really enjoyed this contemporary romance story by Jaye Elliott! I’ve read some of her fantasy novels under her other name (Jaye L Knight) and loved those, so was excited to try a new story from her as well. And it didn’t disappoint.No Chance Meeting is a story of struggles and pain, but also a story of relationships and support and hope. It starts out with main character Alex struggling deeply and about to end her life. Thankfully, an occurrence happens to prevent this and sets her on a whole new journey in her life.There was a section between the beginning and middle where it almost felt like the whole topic of suicide was almost unmentioned, though, which I feel a little unlikely. Yes, she had a reason to live now, but I feel like with her being miserable enough to end her life, it wouldn’t be something that wasn’t on her mind 24/7 or nearly. However, the story did work its way back to that and she dealt more with it. And with me mentioning this, I’m not saying that it wasn’t handled well, because this serious topic was handled quite well in this novel, and the seriousness of it was portrayed aptly. For most of the book it was that way. There was just a small section where it was almost forgotten about, which is okay, just something I noticed.I loved the characters relationship – Alex and Riley were a lovely pair, and stronger together. I also love the small town atmosphere, and that ending was super sweet. It was a great amount of romance – nothing over the top, they held accountability for each other, and it was realistic and sweet. The supporting characters were also enjoyable, and I enjoyed each interaction with them. Well, except a bad character or two. ;) But we’re not supposed to like them, so that was an appropriate reaction, haha. ;)All in all, a very sweet read!
Author Guest Post:

This is a scene I ended up cutting that takes place after Alex and Riley visit Riley’s grandpa. As much as I liked it, I just didn’t feel it was necessary for moving the story forward and made the decision to scrap it.

With the heat turned up in her apartment and a steaming cup of coffee, Alex didn’t mind the dreary weather. She stayed in her pajamas while she sat in the living room with her Bible for an hour before she finally dressed in a comfortable pair of jeans and a fleece-lined hoodie. It was one of the first mornings in a long time that she felt good about her day.

In fact, after seeing Joe’s sketches, she had an urge to get out her own sketchbook. She ignored it at first. After all, she was supposed to be taking a break, and not even a week had passed since she’d put her art supplies away. However, after contemplating it for a while, she decided to give it a try. She wouldn’t put too much thought into it and wouldn’t be critical. She would only do it for fun. Beyond that, she would see what happened.

Gathering her sketchpad and container of charcoal pencils, she sat down at the kitchen table with a full mug of coffee to begin. She forced herself not to think but to just draw. Before long, she became engrossed in the lines, the shading, and the smudging. The motions and the creative outlet were like therapy.

Around noon, a knock at the door startled her from her drawing. She glanced at her hands, which were smeared with charcoal, but got up to answer the door anyway. She was an artist, after all. Getting covered in charcoal or paint was part of the job. Outside, she found not a stranger but Riley standing on her balcony. Had she somehow mixed up her days and was supposed to be heading to work? She did a quick mental calculation. But no, it was Tuesday, one of her days off.

She gave him a questioning look. His smile said he was up to something, and then he pulled his hand out from behind his back to reveal a bouquet of yellow and orange roses. Her mouth dropped open.

“What are these for?” She took them from him and backed up so he could step inside, out of the rain.

He shrugged. “Our first date was a month ago.”

Alex gaped at him again. “You remembered our one-month anniversary?”

“Well,” he looked a little bashful, “no, but I was looking at the calendar this morning and realized it, so . . .”

Tears pooled in Alex’s eyes at how sweet he was. Though she had always believed there were guys like him out there, she had seriously begun to question whether or not she would ever meet one of them.

“You spoil me too much.” But she gave him a wide smile. “Thank you. I love them.” They were the perfect colors for fall, and she had a lovely aqua vase to put them in.

Riley nodded and then must have noticed her art supplies on the table.

“I know was going to take a break,” Alex said, glancing over at it as well, “but your grandpa inspired me to do a little sketching this morning.” She set the roses down carefully on the counter and retrieved her close-to-finished sketch. “I just have to work on a few more details.”

She handed it to Riley, holding her breath. Even after all this time, showing people her artwork still sent fear of criticism cascading like cold rain into her stomach. However, his smile calmed her. She’d sketched a picture of his grandpa based on a photo a CNA had taken of the three of them yesterday. She had feared she wouldn’t be able to accurately capture Joe’s twinkling eyes but, in the end, she found herself more or less satisfied. At least she hadn’t failed miserably.

“This is great. My granddad would love to see it. Maybe you can bring it next time we visit him.”

Riley handed the sketch back, and Alex laid it on the table where she could add the finishing touches.

“I guess I better head back to the bar,” Riley said.

Alex opened the door for him. Before he walked out, he paused and gave her a soft kiss. It left Alex warm, and happy, and wishing he didn’t have to leave.

Still leaning close to her, he said, “I’m glad you agreed to that first date.”

“So am I,” she murmured. More than she could ever put into words.

He walked out then, and she hated to close the door on him, but she would have to content herself with waiting to see him again for work tomorrow.

Jaye Elliot is an award-winning author, country girl, and hopeless romantic at heart. She loves a good hero and will always sigh happily during the lights scene in Tangled. She writes from her home in the Northwoods of Wisconsin, which she shares with three cats she considers her kids. When not writing romance novels, she pens fantasy and adventure stories as Jaye L. Knight.

Website
Facebook
Instagram
Twitter
Pinterest
Giveaway #1
To celebrate the release of No Chance Meeting, Jaye is giving away a reader bundle that includes a signed copy of NCM, a hand-painted watercolor bookmark, a coffee mug, and a bag of Dove chocolates! Enter using the form below. U.S. entries only. Not open internationally.

a Rafflecopter giveaway
https://widget-prime.rafflecopter.com/launch.js
Giveaway #2
For her second giveaway, Jaye is offering 3 ebook copies of No Chance Meeting. Open internationally!

Welcome to the Blog Tour and Scavenger Hunt for Isaiah’s Legacy by Mesu Andrews! It’s going to be lots of fun – just read through the post and have a good time!

Learn a little about Isaiah’s Legacy and enter multiple giveaways while picking up CLUES at each stop. Compile all the clues, submit the final PHRASE at the last stop, and you’ll be entered to win one of 3 Grand Prizes!

What are the prizes? They’re completely unique to the winners!

Mesu will contact each winner personally to chat about what they would most like to see in Israel, and then she’ll SHOP for just the right gift while touring Israel, March 6-19! She’ll then purchase a personal and memorable gift specifically chosen for each of those three winners and ship them to each one when she returns. How fun is that?!

How does the Scavenger Hunt & Blog Tour Work?

There is NO RUSH to complete the hunt—you have a whole week! As you visit each blog, it’s our hope that you get to know Mesu’s BFF team and discover the heart behind Isaiah’s Legacy. 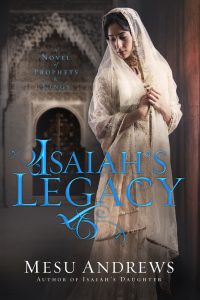 My name is Raechel. I’m excited to celebrate “Isaiah’s Legacy” by Mesu Andrews with you! I love her books and the deep messages they offer.

You can sign up for Mesu’s newsletter and get Adnah’s Legacy, the prequel novella to Isaiah’s Legacy: https://mesuandrews.com/

Thanks for stopping by! Remember to write down your CLUE before clicking to the next stop.

Clue to write down: A Teacher

Link to STOP #14: A Baker’s Perspective

Bookmark STOP #1 so you can check the tour schedule and get back on track if at any point you get lost or find a broken link.