Why is this book review special, you might ask? Well, this short story is not yet released, nor does it have a cover or ‘about’ blurb. So this is a very, very early review I guess you might say. :)

Short story part of the Tales of Taelis series

Not available. To hint at, it is the short story connected to “Courage and Corruption”, about a character named Alfred.

This was a very good short story, part of the Tales of Taelis series! Very well written, with a meaningful message. It was short, as the style would suggest, but still very enjoyable and a connecting piece to two of the books in this series.
I was impressed that so much could be expressed about Alfred and his journey in such a short amount of story-telling time.
As I said, love the writing style, and the author’s note at the end was beautiful. I really love this series. :)
*I was given an ecopy from the author. All thoughts are my own.

(click on image to go to its amazon page)

What would Maria’s life look like three years after The Destiny of a Galaxy? What about James, Quint, and Winter? This collection of four stories gives readers a glimpse into the romance, faith, trails, and everyday lives of this group as they each explore their Continuing Destiny.
Approximately 17 pages (5,500 words) long.

After finishing The Destiny Trilogy, it was fun to sort of “revisit” them, and see where the characters were a few years past the time where the series ended.
The short story (stories? They were more like chapters told from different character’s POV’s, telling a sort of continuing story) had a bit of a different feel to it, but still familiar and well-written. I very much enjoyed it, and would definitely recommend finishing off this series with this one! Adds a nice touch. :)

(Click on cover image to go to its amazon page)

“Father, Forgive Them” by Sarah Holman

Jonathan was happy that this blasphemer would die. His only regret was that the Romans, not his people, would carry out justice. Yet, his world is rocked with a few words spoken from the cross.

This was a very short story about the death and glorious Resurrection of our Savior. It was a very touching story, as we are reminded the power in the empty grave – He is alive, and has forgiven all. Beautiful message, and well written for being so short!

(Click on Image to Purchase this short story – it’s only 99 cents, and well worth it!)

A Tales of Taelis Short Story

Eleanor is happy to be living with her brother and sister-in-law. She loves helping with her mischievous nephew, John. When John gets away from her one day, it sets off a chain of events that will change her life.

A short short story of faith, friendship, and family. A prequel story for Brothers and Betrayal.

The Tales of Taelis short stories offer a very fun glimpse into some backstory, or sidestories of various characters, and I enjoy that a lot!
This one was so sweet! Eleanor is a great character, and I thoroughly enjoyed reading her story!
I don’t know what else to say besides the fact that I loved it! It really was sweet, and once again, the message was great. Definitely recommend it! 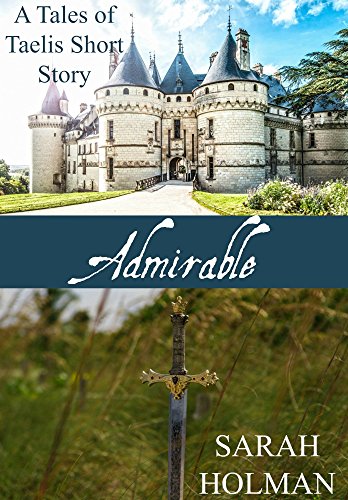 A Tales of Taelis Short Story

Very good short story that gives us a glimpse of William’s backstory from “Adventures and Adversities”! It was very short making it easy to read in one sitting, but still very well-written and I enjoyed getting to read more about William’s past. The message was very sweet and profitable too – trusting God with our loved ones isn’t always the easiest, but it is very important!
Great story. :)

Today I’m sharing a short story I wrote as part of the “They Have a Story” Link up over at Emily Anne’s blog. She posts a Inspiration Picture every month, and we have the choice to write something on it or not. You should check it out if you like writing. :) This is my first time participating. So without further ado, here’s the photo, and my story!

A Greater Freedom by Raechel Lenore

I was afraid again. Not afraid for my own life, but for the precious life of the daughter clinging to me as we awaited our coming judgement. It was always the same. To others, we were never worth more than the tasks we could accomplish. I wanted my daughter to have so much more. But so much had already been ripped away from us. Too much. Sometimes I felt like, “What is one more thing?” but in my soul, I fought against that bleakness. I wanted to believe there was hope, and that it would find us sooner than later.

I watched as the white man came towards, closing the distance between us until finally he stood in front of us. “What have I done?” I whispered in fear, my voice trembling no matter how strong I tried to be for my daughter.
The white man only smiled. But it wasn’t a menacing type of smile that I had grown accustomed to from our life on the big house land. It was a peculiar smile. I waited for the man to speak.
“It’s not what you’ve done. It’s what he’s done,” the white man tossed his head in the opposite direction where another man stood. I hadn’t noticed him before. But what did the white man mean? What had that other man done? She was afraid to voice her question. My daughter then softly pulled away from me, shyly looking up into the face of our “owner”. “Mister, what’s he done?” her little voice asked. I wanted to hug her for the strength she showed. The innocence. And I praised God that she still had some innocence in the rough life we’ve had.
The white man just smiled, “He’s bought your freedom. Good luck to you.”
And with that, he just left. The other man came closer, almost timid-looking. I didn’t know what to say, but once again my daughter spoke up, “Is this for real, mister? Am I free?”
The man bent down to her level, and smiled a smile that was very gentle. He reached for her hand, and said, “Yes. You are free. I have paid the price. You are free.”
“But why?” I heard myself speak, surprising even myself.
A look of sadness and joy mixed together appeared on the man’s face. “Because I am doing it for Someone higher. Someone who loves you very much. Now go, gather your things, and start a new life together. Here is some money to help you get started,” He handed her a sizable pouch.
I still did not truly understand, but I was thankful. Oh was I thankful! My daughter could live a new life. We could be free. “Thank you,” I said to the man. “What will happen to you?” I don’t know why I asked that, but I suddenly had to know.
“I will take your place,” he said.
But…that didn’t seem right. Couldn’t we all be free? Why did something bad have to happen to someone else so that something good could be accomplished in another?
“I do it because I have a Father in Heaven that loves you. I do it willingly. Have no fear – the Lord has delivered you, and someday He will deliver me also. Live in peace,”
Tears suddenly stung my eyes. This man was being uncharacteristically kind, and all because he loved the God whom they both worshiped. “I pray your deliverance comes soon, then,” I said as I bowed my head in thanks.
The man smiled, “Thank you. I am not afraid.”
It was time, then, for my daughter and I to depart….but I would never forget the man’s kindness. He delivered us, so that we might be free. All because of a loving God.

Ah yes, I am actually writing a normal post! And about my writing, no less :D It has been a while, and so I thought ‘why not?’ (anybody thinking of the quote from “Leap Year” when the icky fiance’ says that? XD)

So yes, my writing…

I am only working on a couple projects now – of writing, that is. The biggest news that I have to share here, is that a few days ago, I FINISHED the story of my heart – the novel that has taken me over 4 years to write! It’s all done. Two full notebooks, and lots of pencil stubs later, it is complete.  And I cannot even being to express how exciting, and sad, and amazing that is for me! I don’t feel like I will ever be done with this story though. It’s too close to my heart to ever really be over. =) Next step for that one comes typing it up on the computer and then editing…I’m not exactly sure when I will start that mountainous project.

Currently, my Beauty and the Beast retelling is in its second stage of editing. After that, I imagine I will give it one more read through, and then start the publishing process for that one. So exciting! Even if it isn’t till later this year, or even next year, it’s still exciting that I will be published in the near future!

I am also currently writing a short story for a contest through Homeschooled Authors.

You’ll just have to wait and see what Jane Austen story I am retelling. =) I am also writing this one by hand because my laptop has not been behaving properly. That’s okay though, because I felt that it is God’s doing to have me writing it by hand. It gives Him even more control. :)

I’m also working on another writing project that is my “typical” medieval-y/village-y setting. Fantasy, but not really. Hard to explain. =) I’ve sort of set this beloved story on back-burner until I finish my short story, which I’m hoping will be soon, because I miss that other story which I refer to as “M and A Story” online. =) Once everything is all done and published, I will share names, details, etc.!

I’m editing a couple of friend’s books as well, so that’s fun…

I think this about wraps it up for a writerly update! Not much else to say… =) If you’re a writer, what are you working on at present?