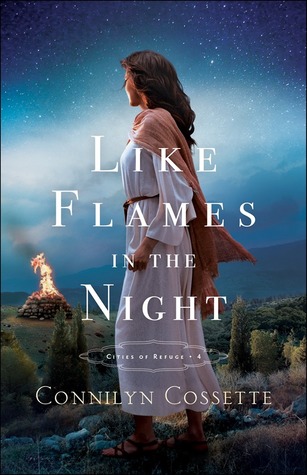 “Until the Mountains Fall” by Connilyn Cossette

Review copy through the publisher

Recently widowed, Rivkah refuses to submit to the Torah law compelling her to marry her husband’s brother and instead flees Kedesh, hoping to use her talents as a scribe to support herself. Without the protections of her father, Kedesh’s head priest, and the safety of the city of refuge, Rivkah soon discovers that the cost of recklessness is her own freedom.

Malakhi has secretly loved Rivkah for years, but he never imagined his older brother’s death would mean wedding her himself. After her disappearance, he throws himself into the ongoing fight against the Canaanites instead of dwelling on all he has lost. But with impending war looming over Israel, Rivkah’s father comes to Malakhi with an impossible request.

As the enemies that Rivkah and Malakhi face from without and within Israel grow more threatening each day, is it too late for the restoration their wounded souls seek?

I have loved every one of this author’s novels, and this one was no exception!
“Until the Mountains Fall” is a beautiful story representing the parable of the Prodigal Son.
I will be honest, I didn’t like main character Rivkah in the beginning. She was selfish and rough, and rude. I was worried her character would alter little, and she’d still be one of those “so strong woman who doesn’t need any man at all ever. end of story.” But her story…her character arc was amazing. Truly, she grew and changed so much, it was beautiful and humbling. And happened so naturally. I’m not saying her character needed to change, but her attitude did, and wow. The result was well done.
Malakhi – he was amazing. A bit gruff for a while there but he did have reason to be. His personal journey was fantastic too, and how this whole story wove together was lovely. The redemption…the sacrifice…the love. Rivkah’s father was one of my favorite characters of this story. His devotion to his daughter was just astounding, and there was a scene at the end that had me crying. It was a truly beautiful representation of Jesus welcoming us back, accepting us, forgiving us, loving us.
The faith wasn’t so much spoken as it was shown in the undertones ~ the allegorical message to it was the heart of it.
This book spanned over several years and covered a lot. It was all done so well. And my heart was so involved. Another captivating read by the author!

“Our family was built atop the ruins of tragedy, Rivkah, each brick fashioned from mercy. You will find no stones in their palms.”

“There is nothing you have done or will do that will ever erase the love I have for you. It is enough that you have returned to me.”

“Shelter of the Most High” by Connilyn Cossette

The daughter of a pagan high priest, Sofea finds solace from her troubles in the freedom of the ocean. But when marauders attack her village on the island of Sicily, she and her cousin are taken across the sea to the shores of Canaan.

Eitan has lived in Kedesh, a City of Refuge, for the last eleven years, haunted by a tragedy in his childhood and chafing at the boundaries placed on him. He is immediately captivated by Sofea, but revealing his most guarded secret could mean drawing her into the danger of his past.

As threats from outside the walls loom and traitors are uncovered within, Sofea and Eitan are plunged into the midst of a murder plot. Will they break free from the shackles of the past in time to uncover the betrayal and save their lives and the lives of those they love?

What fun to be able to read little Eitan’s story from when we first met him in “A Light on the Hill”. Except…little Eitan is no longer little in “Shelter of the Most High”! What happened?! ;) He grew up. Into a very strong, Yahweh-following, handsome young man.
This story is also shared with heroine, Sofea. The foreign speaking spitfire with the utmost concern for her cousin, Prezi. Both of these young woman are strong characters and immediately endearing. Kidnapped from their Island and families that were murdered, the girls manage to escape off the ship on which they were imprisoned, making it to shore but nearly dying in the process. They are rescued by a group of Hebrews who bring them back to the city of refuge, Kedesh.
Not only would the ordeal be terrifying, but not speaking their language or understanding at all would be remarkably hard. It was lovely to see the girls adapt, even through continued hardships.
Some of the tension that occurred towards the middle/end was a bit predictable, though there was one event that I hadn’t suspected that was interesting for sure.
I know the relationship tension is something done in almost every novel and it works for the stories, but I have to admit that I get a little tired of it. I certainly don’t mind realistic relationship problems because relationships are hard, but when it just seems to be a part of the plot it isn’t my favorite.
However, I loved how it was resolved, and the ending was very, very good! I don’t want to give any spoilers, but after the tension event occurred, I was completely riveted, wanting to know how a certain plot was going to be unwound.
I also loved the small hints we got for Prezi’s relationship status, though I know we probably won’t get a book for her story. I loved Prezi, Sofea’s cousin, and fell in love with her sweet character!
This is Biblical Fiction, so of course mentions of Yahweh are woven throughout. Its message wasn’t as strong as I was expecting, so I think that’s why it wasn’t my favorite compared to the first book in this series, but it was still very good, and as I said, I loved the ending – that is where we received some very lovely truths that were healing to the characters. I would’ve liked to see Sofea develop more in her faith in Yahweh, though. I feel like that wasn’t touched upon very deeply.
Eitan’s story was very good in this aspect though.
*I received a complimentary copy of this book from the author/publisher. I was not required to write a positive review. All opinions expressed are mine alone.