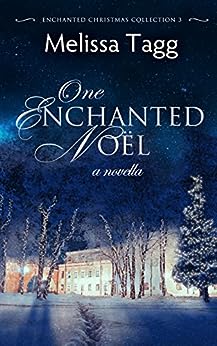 “One Enchanted Noel” by Melissa Tagg

Seb Pierce isn’t exactly a cowboy, but after fifteen years on a ranch in Texas, he might as well be. And he’d do just about anything to keep the rancher who took him in so many years ago from losing his land…including returning to the wealthy roots he’s long since abandoned. Seb agrees to work for his stern grandfather for one year in return for an early draw on his inheritance. But he never expected the agreement to land him in a quirky small town in Iowa at Christmas-time, renovating a dilapidated theater…and running into a woman he never thought he’d see again. She might not remember him, but he remembers her.
After too many years away from her hometown—and too many failures to count—Leigh Renwycke is finally back in Maple Valley and living the stable life she used to wish for. If only she could shake the old restlessness that used to get her into trouble. When Seb Pierce waltzes into her world and begs for her help planning the theater’s holiday reopening, it could be the solution to her discontent. If she pulls it off, it might be enough to jumpstart a new career…and to prove once and for all that the new-and-improved Leigh is here to stay.
But between old secrets and new sparks, restoring a town treasure in time for Christmas may not be as easy as it seems…especially once Leigh learns the truth about Seb.

Surprise! Another darling novella from the amazing Melissa Tagg! I don’t think it’s possible for her to write an un-darling story. (Also I’m pleased with myself for using ‘darling’ twice already, because…well, read the story to find out. ^.^)
As usual, the characters were so life-like, so real. And each one so unique. As this is the third novella (and final novella to the Enchanted Christmas Collection), we finally got the chance to read Leigh’s story! We’ve witnessed parts of her life and struggles through the first two novellas, but finally here, we get to see her life as a whole, see her get her own Happily Ever After. That doesn’t always come easy though. But that only adds the depth and reality of the story.
The hero, Seb, was quite nice. ^.^ He had his own bit of struggles, too, and they both had to find peace through it all.
The whole feeling of the novella was charming. The snow, the movie theater, the festivals that Maple Valley comes up with! I love it.
If you’re in the mood for a sweet and charming Winter Novella, pick this one up! You won’t regret reading a Melissa Tagg story. :)

Good Sunday morning to ye all!

With The Hobbit movie out now, I’m sure many of you have seen or even possibly own your own pair of elven ear cuffs, or other beautiful styles of ear cuffs. I saw one on a gal’s blog as I was passing by, and absolutely fell in love with them. After seeing them, I went on Etsy and found many beautiful, and elegant ear cuffs ( the elf style particularly caught my attention!) I am hoping to review a pair very soon, and share pictures of them if possible, to show you all how gorgeous and fun they are, and to make you want some too! :) They truly would be a fun accessory for anytime wear. At least I think so! I was thinking how neat they would look when I wear my long green shimmery cloak :) See, can’t you just imagine elven ears to complete this look?:

So, check back, and hopefully (God-willing!) I will be able to share photos of the gorgeous elf ear cuffs!

Now on to recent news…

We just took a trip up to Duluth to visit family for an early Christmas, and I did actually get some photos of BentleyVille – which is a festival of lights – and also of a lady’s house on the Point whose yard is all decorated with lights as well. So, I shall try to share some in this post!
Before I do that, I wanted to say quick, that I know I mentioned in my last post that I was hoping to share my thoughts on the movie, The Avengers, but I have decided not to do that at this point, because everyone has a different opinion on it, and it often ends up in an argument of opinions, which is never a favourite of mine… :)
Okey-dokie, here are the pictures now :)
First we’ll start with pictures from BentleyVille – I have more of those, because we did that first, so by the time we got down to the house on the point we were all really really cold!

And here are photos of the house on the Point:

And that is all for pictures. Like I said, I didn’t get many on the Point because it was so cold. :)
Our visit in Duluth was nice, as always. I do so love Duluth. At my grandparents house there are many critters, mainly because my grandma feeds them, and so while up there we got to see two large deer right in her driveway, eating out of a bird feeder, as well as rabbits eating bunny food that my grandma leaves for them ^.^ We almost came home with a stray cat she has tamed, but it didn’t work out.
Anywho, there are the pictures!

Merry Christmas!
I hope y’all have a extremely blessed day, filled with happiness and joy, remembering the reason Jesus Christ was born for us this day!