Review copy through the author

The adventure she always wanted
revealed a love she could never have.

Felicity, a young librarian, is certain her only adventures will come in the form of the books she reads. When her uncle reveals that the palace librarians have the secret gift of interpreting fairy tales, stories that control the fate of the kingdom, she is thrust into a new world of magic. Between rescuing Cinderella, charming a prince, and battling an evil force trying to sabotage the fairy tale, Felicity realizes orchestrating a happily ever after ending is going to take all of her wits.

However, it’s her heart that is put to the real test. She finds herself having to choose between her own happy ending or protecting the fairy tale she’s been tasked with completing. After the clock strikes midnight, Felicity discovers her world will change forever and some fates are stronger than magic. 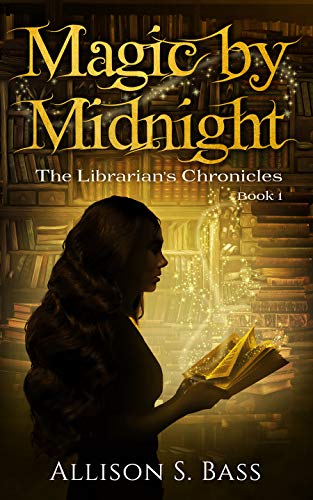 I’d like to start off my review with a personal disclaimer of sorts. You see, in general I don’t read a lot of books that contain magic and especially sorcery. I admit that I am a pretty conservative reader when it comes to that.  I don’t like reading about sorcery, and that was my least favorite part about this book. It thankfully was not so heavily portrayed in MBM, and what was shown was clearly shown as bad.
Now, that being stated, I would like to say how exceptional the writing itself was. The author has remarkable talent, and I was completely swept away in this story. The characters were more than just characters, they were three-dimensional. Magic by Midnight captured my attention, and kept me rooted to the page – I had to know how everything would play out. I had my suspicions, but was surprised several times by various twists. And that ending…I wanted to possibly cry a bit. XD I definitely need to read the next book when it comes out because there just has to be more…is that really how it ends?! Inquiring readers need answers!
I loved Felicity – she was spunky. She could get a little head-strong at points, but I liked her character. And Alexander was amazing too – I loved their friendship so much. I also loved Jack, and dare to hope we find out more about his story in the next book too!
I have more I could say, but that would be spoilers so I will resist. ;)
It was a very fun book: clean, exciting, and adventurous. There were a couple scenes that were a bit creepy, and I don’t know that I’d watch it if it were a movie. XD Also, I’d add that if we actually had the responsibility in our hands to have to make sure our lives went according to plan – well, goodness, that would be stressful! As a Christian,I know that God is in control and what a relief that is – I admit I wanted to share that with Felicity so many times and then remembered she’s just a character in a book – not real…^.^
Again, I am impressed with the author’s writing talent. Captivating indeed.

*Thank you to the author for the copy of this book!! All thoughts expressed are my own.