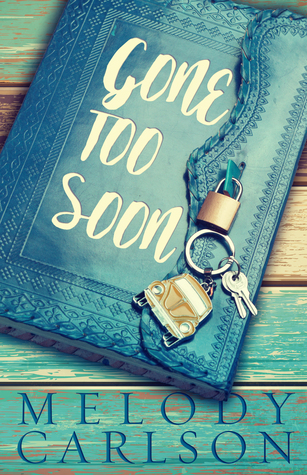 Gone Too Soon by Melody Carlson

An icy road. A car crash.
A family changed forever.

Hannah Josephson had always been the “perfect” daughter. Kiera couldn’t live up to her before, and she certainly can’t now that her older sister has died in a car accident. But the image she carried resentfully of Hannah is challenged when she finds her dead sister’s diary and begins to read. Apparently Hannah’s final year wasn’t as perfect as everyone thought.

Caught in a pattern of blaming each other, the Josephson family is falling apart. Their father has left, their mother is mixing opiates and alcohol, little sister Maddie has been shipped off to spend the whole summer with their grandmother, and Kiera feels utterly alone with her grief and anger. A summer job helping at a park in a poor section of town provides a friend and a purpose.

But it’s Hannah’s diary that fills her thoughts. For the first time in years, she feels close to the sister she’s lost. But can the knowledge she gleans about her possibly help her patch back together the family that seems determined to implode?

The Josephson family is falling apart after losing the eldest daughter, Hannah, to a car-crash.
“Gone Too Soon” is told primarily from the first-person perspective of middle daughter, Kiera, with some portions of the story told from mother Moira’s third-person perspective.
I actually really liked Kiera. She was rough around the edges, but certainly not hard to love. She was hurting and scarred with lots of wounds.
As mentioned, the whole family really does have a lot of issues, and reading it was saddening.
The book itself was easy to read – I ended up reading it in two sittings because I didn’t want to stop. However, it is not a light book with easy topics. Moira is trying to ease her pain through vast amounts of alcohol and pills. The father, Alex completely checks out, withdrawing from the family. He seems nice and more gentle at times, but his neglect is another form of abuse, and just as terrible. He abandons his family because he can’t handle it.
The youngest daughter, Maddie, is sent to live with her grandmother for the summer, which was probably the best thing for her.
Kiera finds her deceased sister’s diary and begins reading it, surprised at what she finds but feeling closer to Hannah than she was when she was alive.
I won’t summarize the entire book because you can find that in the book-blurb, but I just want to re-emphasize that this family is struggling. Hard. And Kiera, only 16, is trying to handle everything on her own.
It really did make me sad. She finds solace in her summer job, and the friend she meets there, and at the end there begins healing which is very good. I was very glad to see this one part where a lady prayed for Kiera-the prayer was very beautiful and meaningful.
However, how the novel approached the “God theme” was definitely in the more common, “God is cool” vibe, ‘He just wants to be your friend” etc. which I feel leaves off His holiness, and our reverence for Him. So I didn’t care for that. Also, there was a brief part where evolution/creation was discussed and it was basically discrediting creation which I didn’t care for either. I get that the author probably wanted to come across as unbiased for non-Christian readers, but I expected the more mature, Christian character to have stood up for it or explained Creation with more passion, rather than just passing it off. The scene went like this:
“So you believe the old fable about God creating the world in seven days? I challenge him, ready to debate over evolution.
But he just laughs. “I don’t know about that.”
He goes on the say how he expects that someone had to have created all this beauty of the world, but it was so…flimsy, I felt, and I was a little disturbed about that.
I can’t say I would comfortably hand this to the teens I know. At this point, I don’t think I necessarily would. I would strongly suggest a parent read it first because of its content. I think for a non-Christian teen or someone who is going through the same thing would find this book very good and helpful, but it is rather dark in its premise and plot, and I would definitely suggest parental involvement. I know I am a more cautious reader, but I stand by the verse in the Bible that tells us to think on whatever is lovely, pure, of good report, etc. And no, that certainly doesn’t mean we evade the hard things – not at all! Life gives us many hard things. But we should also be raising our teens and teaching them how to handle these things as well. Because yes, these things happen, but we also have a great Savior to help us.
In the end, I enjoyed reading this book, but would be careful in recommending it.