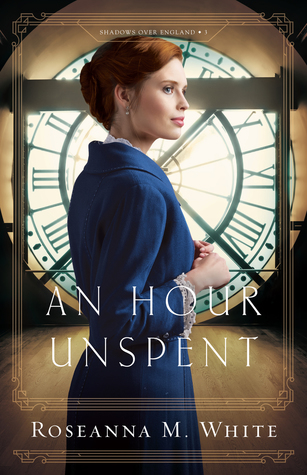 Book Three in the Shadows Over England Series

Review copy through the publishers

Once London’s top thief, Barclay Pearce has turned his back on his life of crime and now uses his skills for a nation at war. But not until he rescues a clockmaker’s daughter from a mugging does he begin to wonder what his future might hold.

Evelina Manning has constantly fought for independence but she certainly never meant for it to inspire her fiancé to end the engagement and enlist in the army. When the intriguing man who saved her returns to the Manning residence to study clockwork repair with her father, she can’t help being interested. But she soon learns that nothing with Barclay Pearce is as simple as it seems.

As 1915 England plunges ever deeper into war, the work of an ingenious clockmaker may give England an unbeatable military edge—and Germany realizes it as well. Evelina’s father soon finds his whole family in danger—and it may just take a reformed thief to steal the time they need to escape it.

Barclay. Barclay. And did I mention Barclay? Because yes. I want to reiterate how much I adored his character! His whole story. But okay. I suppose I should attempt to say more about this novel, right? Because it was all amazing! Barclay just greatly helped that factor. ;)

What a conclusion to the Shadows Over England series! But I am also so sad that it is over. Because these characters have become so real and the family so…familiar that is sad to say goodbye! I am very glad to know that the next series will still give us glimpses of these beloved characters, because I really am not ready to say goodbye. Each family member could have their own book and I would be very happy. ;)

The plot for this one was so well done, so well executed, and just perfect. I loved every piece of it. It held the right amount of intrigue, and mystery, while still not being too overwhelming. The only thing that frustrated me was a reaction of Evelina’s towards the end – understandable, but still I wanted her to do the opposite of what she did! XD Ah if we could only advise characters, right?

The setting was very good, and interwoven into the story so well that it was just part of it. I really enjoyed the clock making aspect of the book, and how the characters would relate it to God. Barclay’s faith was so real and very nicely portrayed, and encouraging. It wasn’t “perfect” because our faith does sometimes falter and we do sometimes question, but it is still strong.

And the relationships between Barclay’s makeshift family was darling to see.

I know I keep coming back to the characters but to me, a book is only as good as its characters and these really were so marvelous!! I loved them all so very, very much.

I just really loved this book. Its character, its setting, its lessons. A superb story for Barclay and Evelina <3

One thought on ““An Hour Unspent” by Roseanna M. White ~ Book Review”