Welcome back to a Character Introduction post! Today’s featured character is Libby Sheffield!

(If you’re new to these posts: The idea behind them is just to spotlight the character a bit, give a little description of their personality, and for fun, a few books I’d recommend to them if I could. ) 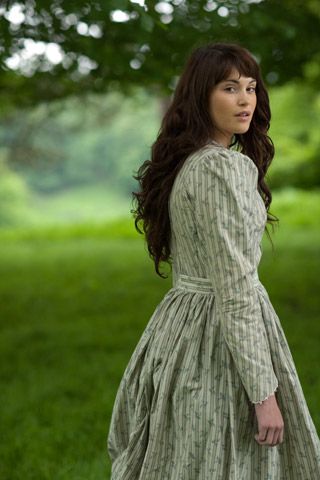 Libby Sheffield, Gossamer Grove 1907
When “The Reckoning at Gossamer Pond” has two heroines, what made me choose the historical over the present day? Um, actually I don’t really have an answer to that. I very much liked each heroine, so I had to just choose one. ;)
Libby Sheffield is a young woman tormented by guilt – a guilt she has tried hard to escape from, to bury. While she is striving to solve the town’s mystery amongst all the strife, her own past continues to follow her, pulling at her conscience. She’s just as broken as everyone else.
She’s a strong character, with a very good heart. She perseveres throughout it all. Through the danger. Because she wants to see things put right again. She wants to believe in the grace the revivalist Jacobus Corbin tells her about.
I love the spirit of this character; her strengths, weaknesses, and determination. You can’t help but root for her the entire journey.
If I were to recommend some books to Libby, I would suggest:
The House on Foster Hill by Jaime Jo Wright ~ It’s only natural that Libby would enjoy a book written by her author too, right?!
Julie by Catherine Marshall ~ I’m not very good at explaining why a character would enjoy the book I recommend…for this one, I just think the overall feeling of the book would be a good match for Libby.
A Name Unknown by Roseanna M. White ~ A bit of a mystery tucked between the pages, I think Libby would enjoy this one too.

Meet Libby for yourself in “The Reckoning at Gossamer Pond” by Jaime Jo Wright:

For over a century, the town of Gossamer Grove has thrived on its charm and midwestern values, but Annalise Forsythe knows painful secrets, including her own, hover just beneath the pleasant faade. When a man is found dead in his run-down trailer home, Annalise inherits the trailer, along with the pictures, vintage obituaries, and old revival posters covering its walls. As she sorts through the collection, she’s wholly unprepared for the ramifications of the dark and deadly secrets she’ll uncover.

A century earlier, Gossamer Grove has been stirred into chaos by the arrival of controversial and charismatic twin revivalists. The chaos takes a murderous turn when Libby Sheffield, working at her father’s newspaper, receives an obituary for a reputable church deacon hours before his death. As she works with the deacon’s son to unravel the mystery behind the crime, it becomes undeniably clear that a reckoning has come to town–but it isn’t until another obituary arrives that they realize the true depths of the danger they’ve waded into.

Two women, separated by a hundred years, must uncover the secrets within the borders of their own town before it’s too late and they lose their future–or their very souls.

You can also “meet” author Jaime Jo Wright in last week’s author interview! Be sure to check that out:

And you can also check out my review here: