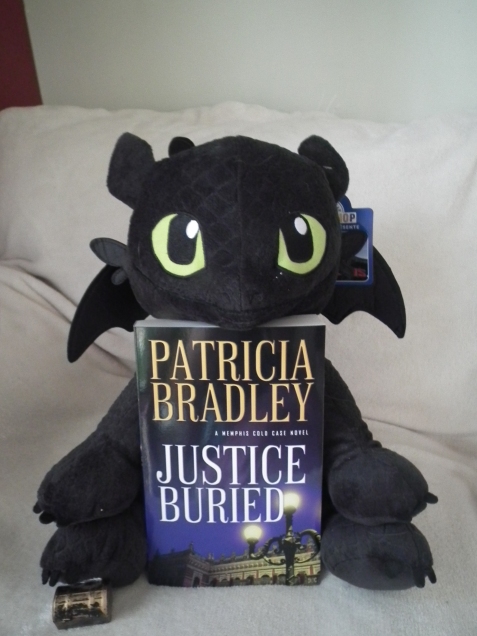 Review copy from the publishers through the Revell Reads Program

In an effort to get her security consulting business off the ground, Kelsey Allen has been spending a lot of time up in the air, rappelling down buildings and climbing through windows to show business owners their vulnerabilities to thieves. When she is hired to pose as a conservator at the Pink Palace Museum in order to test their security weaknesses after some artifacts go missing, she’s ecstatic. But when her investigative focus turns from theft to murder, Kelsey knows she’s out of her league–and possibly in the cross hairs. When blast-from-the-past Detective Brad Hollister is called in to investigate, Kelsey may find that he’s the biggest security threat yet . . . to her heart.

Crackling with romantic tension and laced with intrigue, this suspenseful story from award-winning author Patricia Bradley will keep readers guessing–and looking over their shoulders.

“Justice Buried” is apparently the second book in a series, but I found that it was pretty easy to read as a stand-alone. There were a couple instances where you knew they were referring to the first book, but not in a way that was confusing or made you think you had to read the first one first. :) I’m sure it’s probably best enjoyed to be read that way, but since I didn’t know, I don’t feel like I was unable to still enjoy the story as it was.
Full of mystery and suspense, you were wondering who the murderer was right till the end.
It was an enjoyable book, and kept me interested to find out what happened to the characters. I like Kelsey and Brad, but I think their relationship development could’ve been strengthened a bit, and the ending seemed a tiny bit rushed. But this book does fit in with its genre of Romantic Suspense, and yet it was quite clean which I appreciated a great deal.
That being said, this book I would classify more as a clean book than a Christian book. There were a couple mentions of characters attending church and a random verse thrown out once, but that was it, and the whole thread of faith was not present – very buried if it was there. That disappointed me, but I do still appreciate that it was at least clean.
I received a copy of this book from the publishers. All thoughts presented in this review are my own.