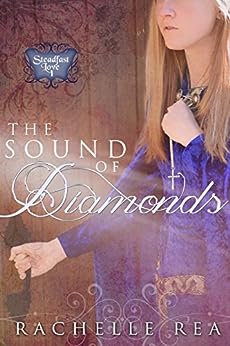 “The Sound of Diamonds” by Rachelle Rea Cobb

Her only chance of getting home is trusting the man she hates.

With the protestant Elizabeth on the throne of England and her family in shambles, Catholic maiden Gwyneth seeks refuge in the Low Countries of Holland, hoping to soothe her aching soul. But when the Iconoclastic Fury descends and bloodshed overtakes her haven, she has no choice but to trust the rogue who arrives, promising to see her safely home to her uncle’s castle. She doesn’t dare to trust him…and yet doesn’t dare to refuse her one chance to preserve her own life and those of the nuns she rescues from the burning convent.
Dirk Godfrey is determined to restore his honor at whatever cost. Running from a tortured past, Dirk knows he has only one chance at redemption, and it lies with the lovely Gwyneth, who hates him for the crimes she thinks he committed. He must see her to safety, prove to the world that he is innocent, prove that her poor eyesight is not the only thing that has blinded her–but what is he to do when those goals clash?

The home Gwyneth knew is not what she once thought. When a dark secret and a twisted plot for power collide in a castle masquerading as a haven, the saint and the sinner must either dare to hold to hope…or be overcome.

I’ve seen lots of friends read this book and recommend it, and I always thought “I want to read that…someday”, but hadn’t had the chance till now. With the birthday-celebration of “The Sound of Silver” I was given the opportunity to read and review “The Sound of Diamonds” which I accepted of course. :)
The time period this book is set in is very richly depicted, and feels very accurate and real. When you read it, you really are in that time, that setting.
Gwyneth and Dirk, the main characters, each had stories of their own that interwove with the other, creating quite the story. I had a little bit of a hard time relating to Gwyn sometimes, but she is still a well-constructed character.
I think my favourite character would have to be Magried. I really liked her from the start, and her side story was so lovely. I often seem to gravitate towards side-characters…I just can’t help it!
This book was one of adventure, danger, honor, and romance. :)
For me personally, it wasn’t a book I absolutely loved, but that is in no way the books fault. As I said, everyone I know who has read it adored it, so I’m sure more readers will feel the same! It was a good book.
Thank you to the author for supplying a complimentary ecopy of this book!

2 thoughts on “Book Review: “The Sound of Diamonds” by Rachelle Rea Cobb”