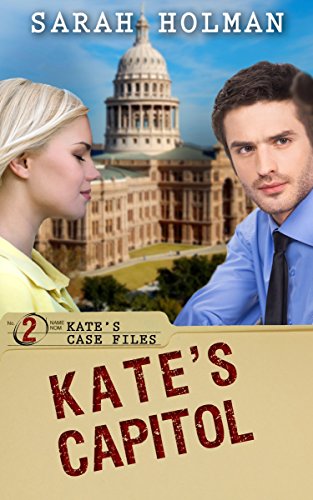 Book 2 in the Kate Files Series

Do the small compromises we make daily really hurt anyone or matter to God?
Kate’s first case as an FBI agent is nothing like she expected. Posing as an intern at the Texas Capitol, she finds herself spending more time behind the computer than she does figuring out the case. Is Representative Jason Ashbury guilty of a third degree felony or is one of his staff to blame? And how is she supposed to handle the effect Patrick has on her?
Patrick was looking forward to guiding Kate through her first case, instead he was assigned to Ashbruy’s home office in Tyler. He cannot figure out either the case or his relationship to Kate. Are Ashbury’s dedicated employees covering for him, or the instigators? Will Kate ever let him be her friend, or will she continue to push him away?

I enjoyed getting the chance to read this next book in the Kate Files series. It was great following up with the characters and getting to know them more.
Though I’ve never been much into political things, I found this book’s plot interesting and engaging.
Though I think that the ‘who-dunnit’ was a little…underdeveloped/obvious. When it came to figuring out who the “bad guy” was, there was a big deal made about who it should be that I was expecting that it just had to be someone else, because who it was just seemed too obvious and pointed out.
But otherwise, it was a good story. :)
Like I said, getting to know Kate more was great, and same with the other characters. I think I still enjoyed Logan the most. :)
The message was good too, and seeing Kate’s journey of faith continuing is great.
Looking forward to more books in the series!
There were quite a lot of spelling/grammatical errors and a double-chapter, but I was reading a pre-copy so I know the final version will be clearer. :)
*I received a complimentary ecopy from the author in exchange for my honest review which I have given.