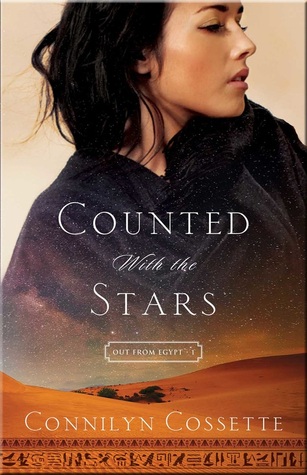 “Counted with the Stars” by Connilyn Cossette

A Story of Love, Desperation, and Hope During a Great Biblical Epoch

Sold into slavery by her father and forsaken by the man she was supposed to marry, young Egyptian Kiya must serve a mistress who takes pleasure in her humiliation. When terrifying plagues strike Egypt, Kiya is in the middle of it all.

To save her older brother and escape the bonds of slavery, Kiya flees with the Hebrews during the Great Exodus. She finds herself utterly dependent on a fearsome God she’s only just beginning to learn about, and in love with a man who despises her people. With everything she’s ever known swept away, will Kiya turn back toward Egypt or surrender her life and her future to Yahweh?

A beautiful piece of Biblical fiction. :)
Because I’d read a couple Biblical fiction books this year that I just couldn’t connect to, I was a little bit apprehensive to begin this book and was afraid it might follow suit. But not at all! What a blessing that was. :) I easily got into this story,and it was so eloquently told, so real in its telling. I really like the first-person perspective for this one. It helped bring it alive, and to really understand Kiya. Who, by the way, was a good character. She was flawed, and real, and likeable. I didn’t actually hold major caring for Eben at first…but towards the end, his relationship with Kiya was adorable and super sweet. I loved Shira and am looking forward to reading her story next. And Jumo – he was a fantastic character as well.
I’ve read my share of retellings of the Biblical account of the Exodus out of Egypt, but this was unique – it impressed me! It wasn’t exactly what I’ve read before, and I enjoyed that.
There were only two things that set any ‘flags’ up for me, and so I shall share those:
I don’t think I care for the thought that when God parted the sea through Moses, that the sea turned into ice because of a cold wind. Yes, the book said that God sent the cold wind, but I don’t personally think that it would be something that could be explained as ‘natural causes’ for that one. The rushing water being parted would be more spectacular, and God’s miracles didn’t need to be ‘explained away’. They couldn’t be.
The other thing was, it wasn’t entirely clear that all of Egypt’s gods weren’t actually real and powerful. There was this underlying theme that made it seem like Egypt’s gods, though helpless, were real, and that Yahweh was just the most powerful of them.  Like God is just another of the gods. But there are no other gods besides Yahweh.  People may ‘see’ them as other gods and choose to believe they are real, but they, like the Egyptian’s gods, were idols after Satan. And I get that Kiya wouldn’t understand this at first, but I was expecting one of the Hebrews to explain it in the end with clarity, and that didn’t happen.
But otherwise, I did really like this book and was quite satisfied with it.
I was rather sad to leave it. Once I finished it, I would think to sit down and read but then realised I had finished it already…kinda bummed! But that is a good thing in a book, in my opinion. And I’m looking forward to the other books in this series. :)
I marked several quotes, and will share those too. :)
“But I know there is a reason for everything He does, and even if my human mind can’t wrap itself around His plan, I will follow. All I know is what my father told me from the time I was a tiny girl. Elohim will rescue us, and as we suffer under the hand of Pharaoh, He is building, preparing us for something.”
“For what?”
“For something we cannot even imagine.” her strange green-gray eyes searched mine for a long moment. “Perhaps He is preparing you, too.”
– Chapter 8 pg 81
“Yahweh does things in His own time. He is preparing us.” – Chapter 10 pg 96
“Our only hope is the wheat and spelt.” “They weren’t ruined by the storm?” “No, they aren’t quite ready for harvest, and their stalks are still flexible. They were bent by the storm, but not broken.” – Chapter 13 pg 121 – This just reminded me of the verse that says God will not bruise a broken reed. :)
“Sometimes it seems to me like Yahweh chooses to work through the most unlikely of people.”  – Chapter 24 pg 193
“But I am not one of His people, why would He protect me?” The man turned to me, his eyes burning with passion. “He created you…He knows you…and will…make Himself known to you.”  – Chapter 31 pg 235
“He placed a large hand on my shoulder. “Ask Him to reveal Himself.” – Chapter 31 pg 235
“But unlike my father, unlike Shefu, this Father [God] had not turned His back on me – instead He liberated me.”
“Here I was in bondage again, yet somehow I felt free.”  – both from Chapter 38 pg 301
“Shira had questioned, all those months ago, whether Yahweh was preparing me for something. Now I could see that it was true. Yahweh had brought me here into the wilderness to free me, to show me how to leave my idols behind, and to meet the man I would spend my life with. Yahweh cared enough to bring me out of slavery and ignorance, protect me in the desert, and to reveal Himself to me in a tent during the middle of a battle. The God who parted the sea could surely mend the rift in my heart.”  – Chapter 40 pg 323
So yes, a very enjoyable book!
**I received a complimentary copy from Bethany House in exchange for my honest review which I have given.**

4 thoughts on “Bethany House Book Review: “Counted with the Stars” by Connilyn Cossette”